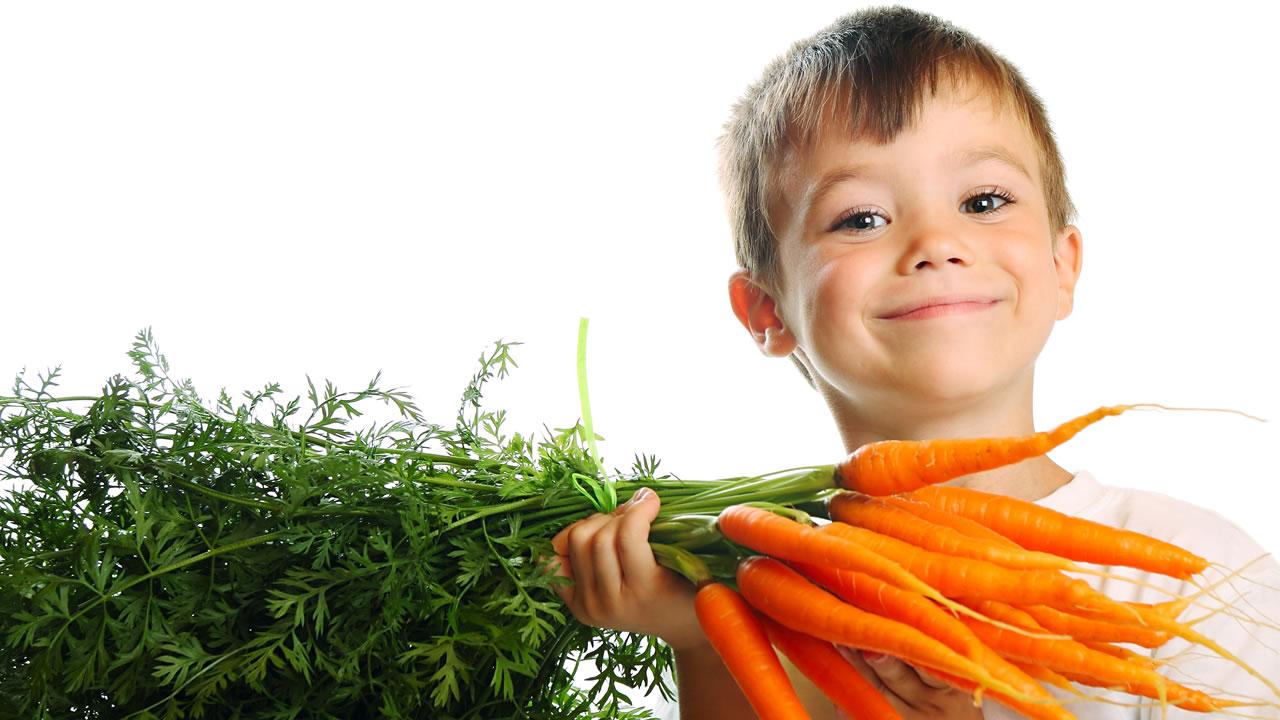 SAN DIEGO (April 27, 2014) – Can we fight childhood obesity by telling kids to eat more, not less? Researchers behind a new comprehensive school nutrition and wellness program say you get further by offering kids a carrot—literally, in this case—by giving them reasons to be excited about fruits and vegetables, rather than harping about what they should avoid, such as sugar-sweetened beverages.

In a randomized control study, the researchers found 4th-graders who participated in the nutrition program ate substantially more fruits and vegetables and lowered their body mass index (BMI) during the school year that the program was implemented. The percentage of 4th-graders who were overweight or obese dropped from 56 percent to 38 percent over the course of the year.

“We take the approach that positive messages are going to be more readily adopted by students than restrictive messages,” said Rachel Scherr, Ph.D., an assistant project scientist at the University of California at Davis and one of the study’s lead investigators. “For us, the most important thing is that the kids and their families really enjoyed the program. It was very successful, and I think it was critical that we focused on empowering kids and their families to want to make a change.”

The “Shaping Healthy Choices Program” takes a holistic approach to engage students, schools, parents and community partners in building healthful habits. At its core is a curriculum that integrates classroom nutrition activities with physical activity and gardening. It also includes cooking demonstrations and recipes, health-related activities for school events, family newsletters and guidance for school lunchrooms to encourage healthy eating, for example, by creating a salad bar.

Four elementary schools in two California school districts participated in the study. In each district, one school received the Shaping Healthy Choices Program over the course of the 2012-2013 school year while the other school did not. The researchers assessed several outcomes including students’ BMI, reported dietary intake and knowledge about nutrition at the start and end of the school year.

Although the analyses are still underway, preliminary results from one district show participating children dropped their BMI percentile by nearly 9 points, from an average of the 77th percentile to an average of the 68th percentile. Participating 4th-grade children who reported eating one or fewer servings of vegetables per day at the start of the study increased their vegetable intake by 40 percent. Students at the school that did not receive the Shaping Healthy Choices Program showed no change in BMI, vegetable intake or nutrition knowledge.

Scherr said the results show that the program has a real impact on students’ health. “When we designed the study, we anticipated short-term outcomes like kids having more knowledge of nutrition or being able to identify more vegetables. We always had a long-term goal of decreasing BMI, but we didn’t anticipate that it would happen in such a short timeframe. We are thrilled,” said Scherr.

The program was designed to be easily integrated into the Common Core standards now being rolled out in 44 U.S. states. The program’s multiple components can be adopted separately or together, though the study only evaluated the effectiveness of the full program.

Most components can be implemented at little cost. Some elements, such as building a school garden or creating a salad bar, require a small amount of start-up funding. “There’s room for a program like this at all schools,” said Scherr. “It’s very cost-effective, and it’s been designed so schools can adopt the whole program or just the parts that are most feasible for them.”

The researchers plan to make the full program toolkit available online for free by the end of 2014, including professional development resources to facilitate the program’s implementation. Although the researchers played a major role in implementing the program at the test schools during the study, they believe that most schools will be able to adopt the program without outside assistance.

Recent estimates indicate nearly one-third of U.S. children are overweight or obese, raising their risk of obesity in adulthood and a host of associated health problems. Most children do not meet current dietary guidelines for eating fruits and vegetables.

The study was funded by a University of California Agriculture and Natural Resources Competitive Grant.

Experimental Biology is an annual meeting comprised of more than 14,000 scientists and exhibitors from six sponsoring societies and multiple guest societies. With a mission to share the newest scientific concepts and research findings shaping clinical advances, the meeting offers an unparalleled opportunity for exchange among scientists from across the United States and the world who represent dozens of scientific areas, from laboratory to translational to clinical research. www.experimentalbiology.org

About the American Society for Nutrition (ASN)